GEORGE IV: ART & SPECTACLE at the Queen's Gallery; The Sins of Those Who Fill the Museum

Americans aren't likely to know much about England's King George IV, though students of literature and decorative arts know the Regency Period. It is named for the years in which George as Prince—"Prinny"—was regent during the madness and decline of his father, George III, of whom Americans do know. Jane Austen wrote during the reign of George IV, who was in fact her patron, as he was of many great artists: painters Sir Thomas Lawrence, Joshua Reynolds, Thomas Gainsborough, George Stubbs; architects and decorators Henry Holland, John Nash, Jeffry Wyatville, and John Crace.

During the years of his regency and reign (1811-1830), George IV commissioned Britain's and France's finest jewelers, cabinet makers, and decorators. His collections of gems, armory, furnishings, paintings, and miniatures defy the imagination. He built or renovated Carlton House (subsequently destroyed), Brighton Pavilion, St. James Palace, Buckingham Palace, and Windsor Castle. In the current show at the Queen's Gallery adjoining Buckingham Palace, the breadth of vision, the taste, and the inexhaustible vanity of George IV are suggested in a stunning show. We can gather through sumptuous display of choice artifacts this single individual's almost inconceivable influence on Western art and culture, permanently imprinted in so few years.

Art & Spectacle gives us a choice sample of George's prodigious relish for the world stage. George Stubbs portrays him as a man of fashion on a handsome horse; John Singleton Copley paints him in scarlet military costume on a prancing steed; Benjamin Robert Haydon shows him with Wellington, overlooking the Waterloo battlefield. But we see him reflected not only as the royal and tastemaker he saw himself, but also as a lustful man whose appetite for art is but one of many insatiable cravings the public mocked. In prints and cartoons, he is satirized for his expensive, eccentric taste for chinoiserie. He is reviled for his pursuit of mistresses and humiliation of his wife, Queen Caroline. We see that he infuriated his people as a wanton spendthrift who drained the national coffers on his personal pleasures.

Only royal or imperial riches could assemble the treasures displayed in Art & Spectacle; even if he acquired much at discount. George was a committed Francophile when the French aristocracy was trying to save itself in the aftermath of the French Revolution and after the fall of Napoleon's Empire. George was glad to relieve them of their Dutch Masters paintings and exquisite porcelains a bon marche. He acquired Napoleon's Table of the Great Commanders of Antiquity, Sevres porcelain and gilt bronze, on which he significantly rests his hand in the 1821 Sir Thomas Lawrence royal portrait.


George IV, least loved of monarchs,
created through his imagination and desire a phenomenal material legacy. To amass such treasure to fill his sequence of new palaces required dreaming and acquisition of knowledge on a prodigious scale. Study and imagination on that level are among the capacities and the gifts of great wealth, whatever their follies or crimes.


George's grand scale was seen not only in his ambition or acquisition, nor in the illusion of endless wealth (for it was an illusion—George IV's bilking of artisans was beyond Trumpian). We find in every painting and artifact artists' soaring and informed conceptions. We see breathtaking attention to details of materials and workmanship.


Each work on display is a self-contained, fabricated world of history, idea, design, and discipline: a treasure of human invention and effort. The accumulation of these magnificent objects is indeed Luxury and Spectacle. Even in the directed context of a labeled art gallery, the softening effect of sumptuousness must be absorbed by the most morally straitened viewer. Ebony, gems, gold, and silver: the work of carvers, painters, drapers, ceramicists who elevated this world of clay to an empyrean ideal through mastery of precious elements, the same used in the greatest edifices for worship of every god.

My mind several times returned to the United States while I viewed this exhibition, for I was bound to contemplate not only the heart-stopping art, but the riches behind it, almost unfathomable to most Americans. We do not have a national treasury supporting royal collectors; our government is, in the best of times, a reluctant and penurious supporter of any arts. That a national collection would have been assembled on tax dollars in the U.S. is a risible notion.


In America, the philanthropy of capitalists—their corporations, families and heirs—has blessed our national art institutions, our private and university museums. Robert Lehman, the Guggenheims, Martin A. Ryerson, Michael Bloomberg. The Sacklers.The Sackler family's pharmaceutical company manufactures the addictive painkiller OxyContin, which has been involved in millions of deaths in the United States. The relationship between the manufacturer, prescribers, suppliers, black marketeers, and social factors is complex; culpability for loss of life is not neatly ascribed. Yet some would simplify this morass by blaming the biggest targets for the whole complex of problems. They denounce the billionaire Sackler family, sparing the doctor's offices, pharmacies, or dealers of Nan Goldin and all other protestors who suffered by the drug. Major art institutions (the Tate! the Guggenheim! the Met!) that have long-established relationships with the Sacklers have responded to pressure from the moral minority, rejecting Sackler offers of new art donations. The Louvre went so far as to remove the Sackler name from a wing.


so short-sighted as abruptly to single out such a donor under popular pressure shows a simplistic, temporizing approach to a complex issue with repercussions far into the future. What is this protest really about? That the Sacklers are causing damage to museums? When Goldin marshaled protestors at the Guggenheim, I doubt that she or anyone reflected on the source of the Guggenheim family wealth in mining and smelting, two industries ruinous to the longevity of workers.
Our National Gallery of Art, similarly, was founded with the philanthropy of the Mellons, American "royalty." Were the Mellon Bank, Chevron, Gulf Oil, and Alcoa benevolent institutions? Was Mellon money cleaner than Sacklers'? Did it do less damage than BP's has done to the National Gallery in London? Where are the “pure” capitalist donors for public institutions? Shall museum directors in the future administer ethics quizzes to potential donors while righteous crowd-funding attempts to fill the gaps left by the defection of the monied?

Americans are very uncomfortable with extraordinary wealth, whatever it accomplishes, much of which we find distasteful and wasteful—as George IV's people did his. Particularly at this moment, income inequality is an urgent issue in our country.The opioid crisis highlights the chasm between very wealthy capitalists and those whose lives are bearable only when they are relieved of feeling, and OxyContin is the perfect emblem of this class stress.To contort this issue of economic injustice into one that undermines the future of public art collections is a mistake.

The blood that inevitably stains capitalist hands does not prevent them from giving. And to refuse gifts out-of-hand from the compromised super-rich will create gaps in public collections that future museum-goers will consider the result of whimsical, moralistic excesses from a brief, high-minded historical movement. To ask whether it's right to place the Sacklers' gifts and name in a museum is reasonable: Ask those questions of every donor in a context of thorough and on-going ethical study within the museum.

Ethics is a practical, everyday study that should be considered without haste, accounting for the complexity of the institution and the interests of everyone with stakes in it. Ethics takes a long look to make decisions in the present. Though a museum doesn't exist only in the present, it legitimately can be where topical expression flourishes. In the museum, the opioid crisis can be witnessed by Nan Goldin and the many other artists affected, if they truly believe in the power of their art. When the institution itself becomes an actor in a drama unrelated to its central missions of presenting and collecting art (exceptions: Is it art to be returned to a rightful owner? Was the building built with slave labor?), it is depriving current and future art-goers of a growing collection.

George IV may have been a despicable king, but we note it on the labels, while we stand in awe before his collection, enthralled by what he left us. In the next century and the one after that, may viewers have the choice to read about or to ignore the footnoted opioid crisis of 2020, while their eyes feast on the Sacklers' shared legacy of great art?

GEORGE IV: ART & SPECTACLE at the Queen's Gallery; The Sins of Those Who Fill the Museum 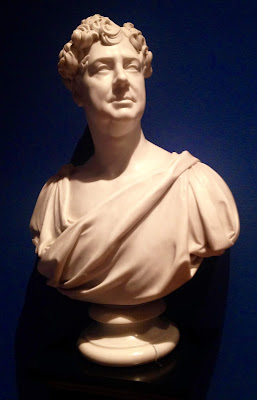 STARR REVIEW, New Edition
Learn more about my art and writing on my web site, Ann-Starr.com. If you'd like to meet with me to discuss your work or statement in process; your selection of work for a show; or text for your catalog, contact me at annstarr@sbcglobal.net.